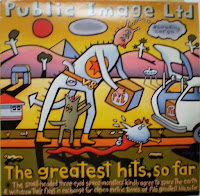 I have a ticket for the P.I.L concert  (Milan October 11). I didn' t listen to P.I.L. since many years so I decided to prepare myself for the next concert playing some old LP.
I read that John Lydon come back with a new work in 2012 after 20 years and that a new album was just release in 2015. I listen to that a little bit and at the moment I cannot give an opinion.
Waiting for that here is a Greatest Hits released in 1990. 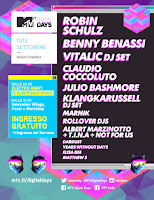 Last Friday, after dinner, I walk to "Villa Reale" following a river of young people. My daughter explain to me it was a big appointment for Monza (MTV Digital Days). Robin Schulz will close the first days so we decided to stay. The Villa Reale garden is a wonderful place and the end of summer weather was OK. At the end it was a nice summer party. An open discotheque and also Robin Schulz show acceptable ( Benny Benassi plays before). He propose all his famous hits including the "Prayer in C " version (the original one from Lilly Wood & the Prick has not the same impact).
At the end a good night, better than spend time at the TV or PC.

Saturday August 29, 2015 was a good summer end day. I spent the late morning and first afternoon winsurfing on the Como lake (it' s a must at least one time for season since 30 years) and then a night to a concert (this time I was alone because aìof vacation time). The concert was an old band of italian progressive rock "LE ORME " with PFM, Banco del mutuo soccorso, Biglietto per l'inferno and others  were the hit of italian progressive rock of ' 70 years.
I was just a child when they come with their "innovative " music in 72-73. So it was a flash back to listen their hits more than 30 years later. Only one of the original components is still there (the drummer Miki dei Rossi ) and despite the 67 years old is full of energy. The new band is anyway a good band (not like the original one) specially the keyboards players is superb. At the end a very good revival evening. Iam now playing the old LP of the band time after time " Collage- Uomo di pezza- Felona & Sorona etc. etc. Good music is definitively  without time!!!